How much drinking is too much? Isn’t a glass of wine good for you? Why do some people go overboard when they drink and others can have one drink and stop? These are commonly asked questions that many people just don’t know the answer to. Alcohol is a prevalent part of our culture, serves as a rite of passage to adulthood, and sometimes relaxation after a long day. Many of us, however, simply cannot stop drinking after the first drink. Having some facts about alcoholism can help you or a loved one if you suspect there is a problem.

Alcohol Use Disorder, or AUD is the clinical term for alcoholism. Simply put, it means that someone cannot stop drinking after the first drink or is unable to stop drinking for a prolonged period of time. Alcoholism can present itself early or late in life. It can affect women and men and even adolescents. Alcoholism does not discriminate. It affects all races, creeds and ages.What does alcoholism look like? Here are some symptoms of alcohol use disorder:

• Drinking more or for a longer time than originally intended
• Needing more alcohol to achieve the same “high”
• Withdrawal symptoms like “the shakes”, nausea, headaches or even DT’s when not drinking
• Wanting to cut down on drinking but not being able to
• Spending more and more time and resources to get or hide alcohol
• Isolation from work, social situations, or recreational activities
• Continuing to drink even after seeing that alcohol is creating physical and emotional problems

In the United States, alcohol is the most abused drug: more than prescription pain medication, more than heroin, cocaine, or “meth.” In a recent study, 27 million Americans are alcoholics. That’s 7.2% of the population.

There are 9% more alcoholic men than women. Studies show that this may be because more dopamine is released in their brains when they drink. This means that it is more pleasurable for men.

Because of physiological differences, moderate drinking among women can cause a variety of health risks. A lower amount of body water and different enzyme makeup means alcohol-related problems occur at lower drinking levels in women. Visit our blog to learn more.

4. You can inherit alcoholism from your family

If there is alcoholism in your family, you are 4 times more likely to develop alcoholism.

5. Alcohol Withdrawal can be fatal

Someone who abuses alcohol for a very long time has caused extreme damage to many of the body’s systems. For these individuals, stopping drinking abruptly can lead to seizures or even death. Attending a medical detox facility is highly recommended. It can save a life.

6. Alcoholism is a progressive disease

Alcoholism increases in severity whether you are drinking or not. Many people who have quit drinking for decades experience extreme symptoms very quickly after starting back. Their alcoholism can be far worse than it was when they originally quit drinking.

7. There is a difference between heavy drinking and alcoholism

Someone can “go on a binge” and drink far too heavily in a short period of time. This is “heavy drinking.” A heavy drinker can completely stop drinking on his or her own. Alcoholism is dependence on alcohol. Here a person has cravings and withdrawal symptoms and just cannot quit.

Do you want to be mentally and emotionally stronger in the face of adversity? Keep a gratitude journal. When people are mindful of the good things in their life, they are focused outward, according to Professor Emmons. Keeping mental focus outside of the self tend to lessen depression, aggression and resentment.

Every year, over 85,000 Americans lose their lives because of alcoholism. A chronic alcoholic dies on the average, 30 years earlier than a normal drinker. Alcoholics die of liver disease, car accidents, seizures, mental incapacities…the list goes on ad infinitum.

10. Alcoholism is costly for all of us

$220 billion U.S. dollars were spent in 2006 on medical costs and taxpayer dollars to combat and deal with alcoholism. The amount spent today is much higher. 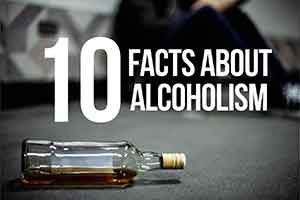 Article Name
10 Facts About Alcoholism
Description
There are aspects of alcoholism that may surprise you. Armed with proper information, you can know your options and get help!
Author
Chris Davenport
Publisher Name
Ventura Recovery Center
Publisher Logo