Getting Sober Young: With Brian W.

When you spend enough time in recovery meetings, you notice certain milestones that stand out when you start doing the math. In our Getting Sober Young series, we interview alcoholics who got sober before they hit the legal drinking age. Because relapse is so common in recovery, we explore what made sobriety stick for them and share it with others.

This installment of Getting Sober Young highlights one individual’s experience—which focuses on the importance of getting out of self; the significance of working the 12 steps with a spiritual guide; and learning to truly understand the messages in AA’s Big Book.

Brian got sober at 18 years old and now has 29 years of continuous sobriety. He was kind enough to give us some insight about how he got—and happily stayed—sober.

So what made you want to get sober when you were 18?

I did not want to get sober. I only got sober because my family left and I was thrown out of my house. I had no relatives to stay with, I had no friends who would put me up anymore. I burned every bridge, and my goal was to be intoxicated for the rest of my life. That was all I wanted. It was the only thing that I found that brought me peace of mind, and so, again, my goal was to be blitzed, permanently.

I got sober because I really had no other choice. At some point, the only thing in front of me was the 12 steps. Basically, I got backed into the 12 steps really is more appropriate. I kept bumping into these things, the steps, and eventually there was nothing else. And so I ran out of all other ideas. I was living in my car, I was unemployable, nobody was giving me money—that was a big part of it. There was really nothing for me. And Alcoholics Anonymous was the only place that welcomed me when no one else welcomed me.

Did you ever relapse, or did you stay sober after your first try?

Well, I’d been coming to meetings for a couple years but I had never done the steps. That was the turning point.

Can you talk a little bit about that shift?

I’ll tell you something that I almost never share, which is when I first came back to AA after my last drunk—I had flat-lined and I’d had delirium tremens—I had a spiritual experience that happened between those two claps [as he claps quickly]. It was that small. I could draw it. Everything was white. All of the fingers of blame that I had pointed at everyone in the world turned around and pointed at me. And there was no question in my mind that there was a higher power.

I had been atheist my whole life. Not an agnostic—an atheist. Something happened to me—I think because I was humbled. I’ve never been humble, before or after. I’ve been trying to get back to that spot I was at that night. That night I was so open and so out of ideas that I feel like I walked into God’s den, and he put his head on my shoulder between those two claps. And that moment sustained me really since then. I’ve really never doubted it since then.

But I still had to do the steps, because even after that I was not doing the steps for a while and the desire to drink returned, like the book says it will. And then I did the steps to the best of my ability. I didn’t know what I was doing but I did the steps. But I missed the plot as I understand it now, which is “get out of yourself.”

So when I was two years sober, I wanted to drink and I wanted to drink every day. I wanted to, but I didn’t want to, but I wanted to, and I thought it was going to pour itself down my throat off of billboards. I was afraid to go in stores, I was afraid if someone slipped on a banana peel I would just slip, slip, slip…It was torture, and I had to go to work and I’d go in the bathroom and close the door and I’d lay on the floor and I’d cry, asking myself, “Why am I like this?”

And then I met someone who had a very unique understanding of it. My friend, who’s still sober—he got sober when he was 18 too—he had a spiritual experience of a different kind, but he was really jaded though. He didn’t like the people in AA, thought they were ridiculous, didn’t trust anyone. But he met this guy that kind of blew him away, and he started this new book study. It was at Camarillo State Hospital, and we drove down there in his big Volkswagen bus and the whole way there I was thinking, “I’m not going to make it another day.”

I wanted to drink so bad I didn’t think I could make it another day. We got there and it was a room about this big and there were like fifty people in there. It was filled with smoke, there were like a thousand years of sobriety in there. And this little Italian guy from Manhattan was sitting at the head of this table and he said, “What, according to the book, is the root of our troubles?” And a bunch of people shouted out different answers, and none of them were right—“Our thinking!” “Our alcoholism!” This and that.

And he said, “Our selfishness.” And someone in the back said, “Where does it say that in the book?” And he took out this binder that weighed like five pounds and slid it up on the desk and he said, “I was hoping you’d ask.” And when that happened, I had a pinprick of hope. After that happened, it quadrupled for the first time in like a year. I thought, “I trust this guy. Maybe I’m missing something.” And then the next week I was there and I still wanted to drink. And I was talking to him before the meeting saying, “Everybody’s telling me to go drink.” Because everybody was telling me to go drink, but I didn’t want to drink, but I did, but I didn’t, and everybody was saying, “Well, you just haven’t had enough.”

I trusted this man. I pulled him aside and said, “My name’s Brian, I’ve been sober for two years and I want to drink every day, but I don’t want to drink, and people are telling me to drink.” And he laughed. If this hadn’t happened I probably wouldn’t be here right now. He laughed and he put his hand on my shoulder and he said, “They’ve got the message garbled and twisted. We’re going to get to that.” And all of the sudden, I had so much more hope.

And then I discovered by going to this study, that even though I was going to meetings, and I was doing everything I thought I was supposed to be doing, I was still thinking of myself all day long. And the book makes it very clear that as an alcoholic I can’t do that if I want to stay sober, and definitely if I want to stay happy.

Did you ever feel influenced to drink by old friends in high school, or like you weren’t having as much fun as people who were drinking?

By the time I was 18, no. It wasn’t fun. It stopped working and I was drinking because I had to. It didn’t shut my brain off anymore, it did not bring me peace of mind anymore at all, I was still very angry when I was drunk, I could still hear my self-hatred loud when I was drunk.

What I do remember is when I was about 60 days sober, some old colleagues from high school invited me to a party and I went over there, and there were no lights on in the house and they were throwing a chair through a hallway, destroying this house. It was just mayhem. I was there for two minutes and just thought, “I can’t be here, around this anymore.” And I’ve never missed it.

Did it feel weird when you turned 21 and could actually go out and drink legally?

The last thing I’ll say is I was really worried about turning 21. It didn’t [feel weird]. Because by the time I was 21, I was so happy that I didn’t even want to. I held onto drugs but I didn’t use them for nine months because I had reservations about never using drugs again, but when I took my nine month chip I came home and I liked myself for the first time in my life, and I became very protective of that feeling. I got rid of the drugs and I have never missed them.

I had trouble wrapping my head around quitting weed at the beginning, too.

I thought weed never steered me wrong, it was my good friend, so I held onto it for a long time, but then all of a sudden, there was no looking back.

Stay tuned for our next edition of Getting Sober Young. 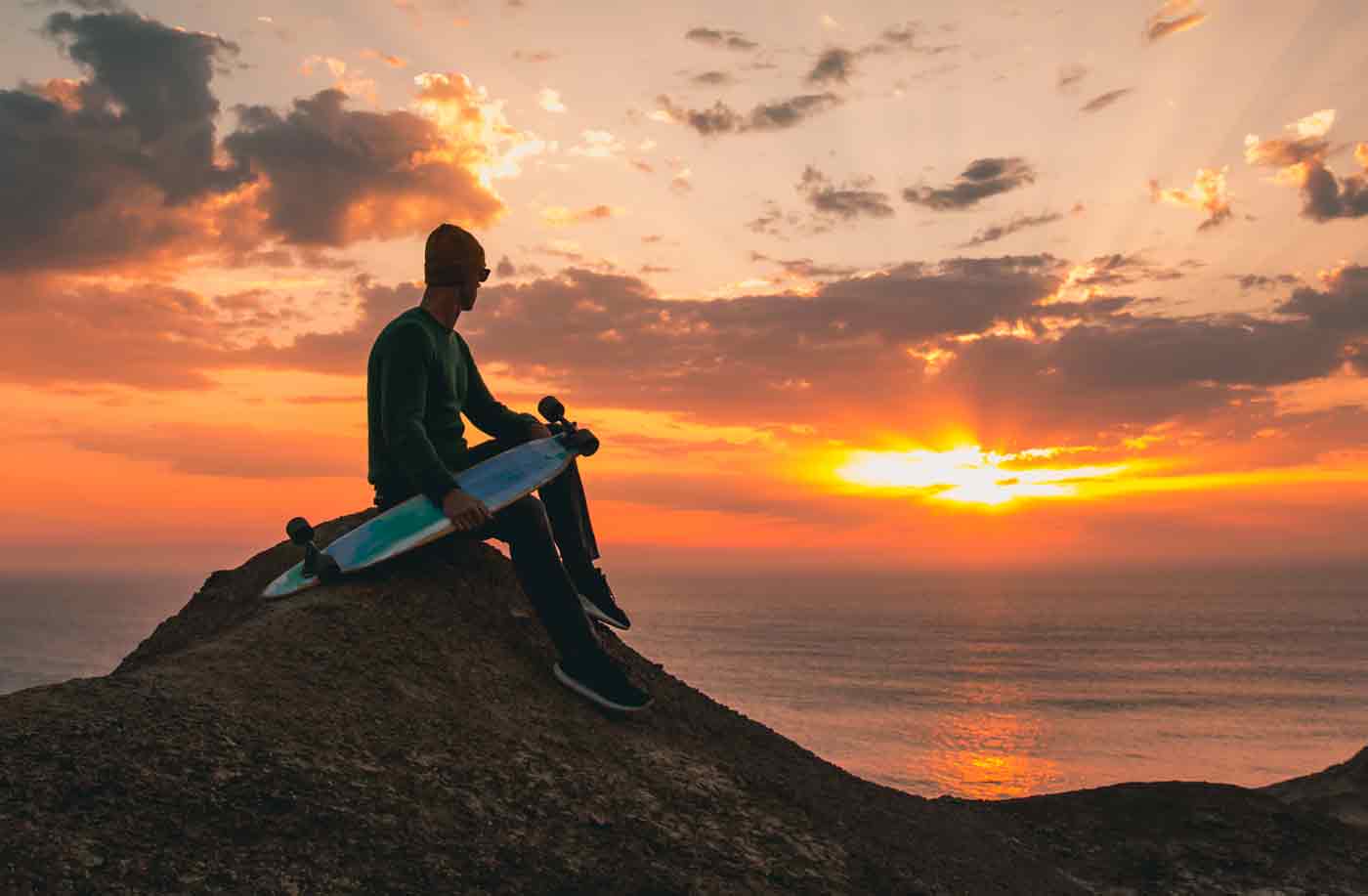 Article Name
Getting Sober Young
Description
Brian was still in his teens when the put down alcohol for good. But that doesn't mean the struggle ended. When he realized that selfishness was his problem all along, he found the key to freedom and purpose.
Author
Taylor J.
Publisher Name
Ventura Recovery Center
Publisher Logo