Addiction occurs when someone has little to no control over what they’re using, doing, or taking. In other words, they “need” their addiction to get by each day. The most common types of addiction are nicotine, alcohol, and drugs. Yet, it can also relate to shopping, gambling, work, sex, and more. What most people don’t realize is that addictions affect finances, relationships, and health. Today we will discuss dopamine’s role in substance abuse.

Dopamine is the neurotransmitter responsible for how we feel pleasure. Your body makes this hormone and the nervous system uses it to get messages to nerve cells. Dopamine plays a large part in the human ability to plan and think. In fact, dopamine helps us focus, take interest in things, and strive.

The chemical is spread through the body along four major pathways inside the brain. However, like other bodily functions, you aren’t aware of it until there’s an issue. See, too much or too little dopamine can lead to a wide array of health issues. Some are more serious than others.

It affects different parts of your physical functions and behavior, such as:

Contact us via our form or by calling 800-247-6111 for more information about Ventura Recovery Center and our mission. Our admissions staff is standing by to assist you with any questions you may have.

Dopamine Addiction and the Human Brain

Some drugs interact with dopamine making it habit-forming for certain people. Alcohol, nicotine, and other street drugs have addictive qualities that activate the release of dopamine. Once ingested, these substances cause a dopamine rush that’s quicker and much more intense than it would be without the help of drugs. Hence, the user is left wanting more as soon as it wears off.

As this habit begins to form, the brain’s natural response is to decrease the amount of dopamine that’s made in the body. Since, at this point, you’ll need more of the substance to achieve the pleasure level again drug or alcohol abuse begins.

When dopamine receptors are over-activated, the user can lose interest in other activities and begin acting compulsively. Also, the longer alcohol or drug abuse goes on, the smaller the chance a person can resist consuming the substances.

When the drug is needed more than wanted, addiction has set in. The sad part is that now if the person tries to stop using they will go through many emotional and physical withdrawal symptoms.

It’s also true that even if you give up the addiction for years, being exposed to it can trigger a desire for you to use it again, thus putting you at a high risk of relapse.

Long-Term Changes to the Brain

Nicotine, stimulants, and other substances used for recreational purposes produce changes to the structure of the glia and neurons, as well as dendrites and dendritic spines inside certain dopaminergic regions of the brain.

The people who are addicted to drugs such as methamphetamine, heroin, and cocaine show reduced dopaminergic receptors within the striatum, which can last even for certain periods of time after detoxification and rehabilitation.

The same thing happens with nicotine and alcohol abuse. In other words, the body begins releasing lower amounts of dopamine on its own. This leads to lower levels of sensitivity in addicts to more potent drugs and natural endogenous reinforcement. After enough time, regular rewards in everyday life will no longer feel good. The user will only be able to achieve the reward system in the brain after taking the drug.

There are other studies that found reduced regional brain glucose metabolism, especially within the dorsolateral prefrontal cortex, orbitofrontal cortex, and cingulate gyrus in those suffering from addiction.

However, addiction doesn’t only occur due to substance abuse, it’s also influenced by other environmental factors. Most commonly, addiction is related to higher occurrences of relapse. Dopamine plays a major role in the prediction of reward as well as being rewarding itself.

Hence, dopamine is used for conditioned responses that trigger cravings. For example, if you present animals with neutral stimuli and repeatedly administer drugs, over time the dopamine increase in the brain will only come after being exposed to the stimuli and is the basis of drug-seeking behavior.

If you show rolled-up cash to an addict, it will result in a dopamine rush. This is because the addict needs money to sustain the addiction. In short, dopamine is a key player in the maintenance and onset of drug abuse. It’s important to note that there are other neurochemicals we haven’t discussed that can also play a role in this. The brain’s dopaminergic pathways are responsible for motivation, executive control, and reward within key regions of the brain, all of which are affected by addiction.

In the end, dopamine dysfunction is important for addiction. Therapies that target dopamine are beneficial for rehabilitation and recovery. So, if you are suffering from dopamine addiction, it’s important that you seek help from professionals, as they will know how to help you kick your addiction and cause your body to produce natural dopamine levels once again. 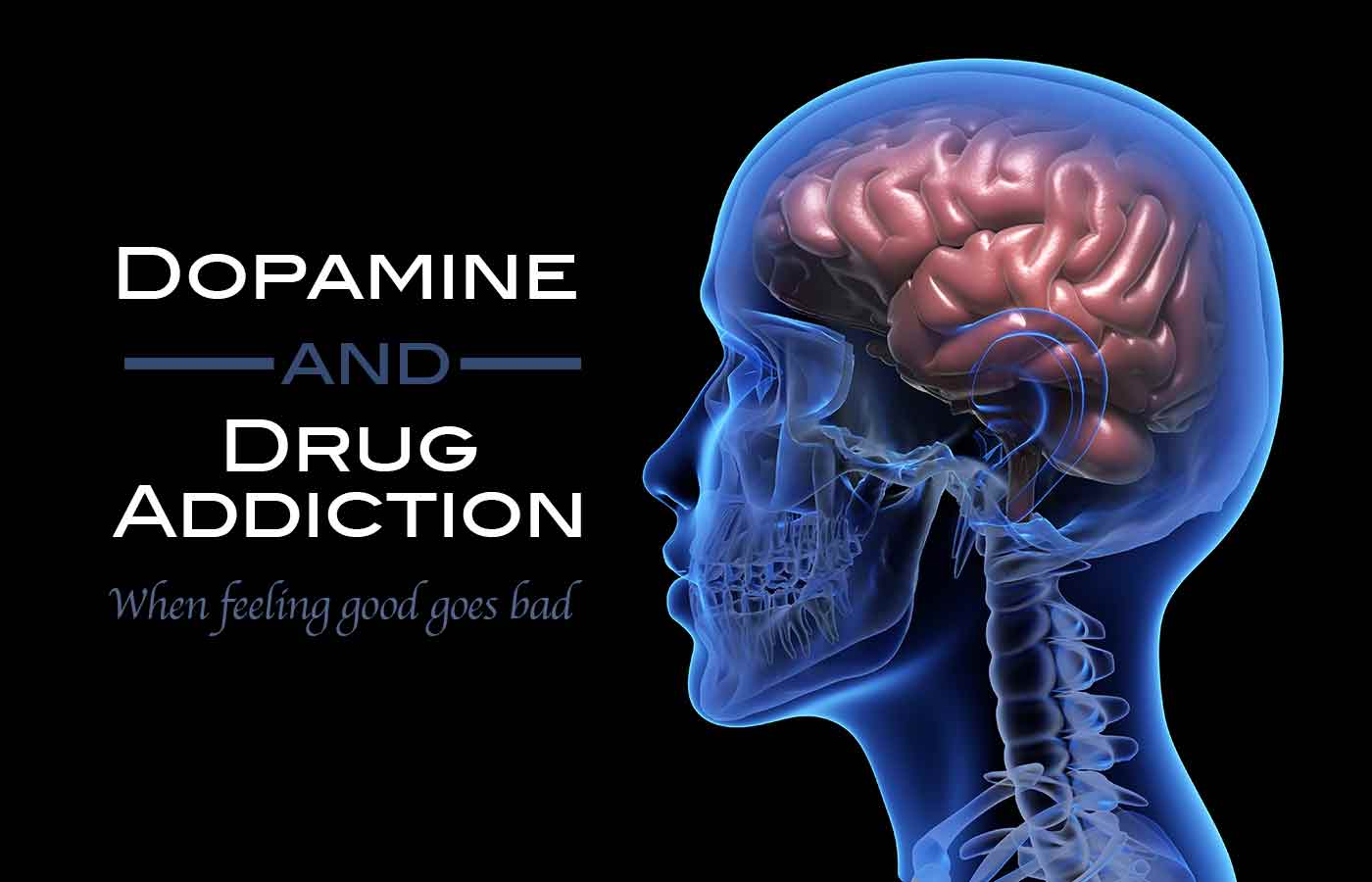 Article Name
Dopamine and Drug Addiction
Description
Also known as the "feel-good" hormone, dopamine is a released when we drink and take drugs. Over time, though, it takes more and more substances to feel as good as before.
Author
Admin
Publisher Name
Ventura Recovery Center
Publisher Logo