Human brains have opioid receptors. Opioids are specifically known for their strong analgesic pain relieving effects but also the high potential for abuse and addiction. History has documented the use of opiates for thousands of years, most prevalently until recently with the use of opium. There is currently an epidemic of opioid substance abuse and addiction. This post will provide background on opioids, examine opioids with an emphasis on addiction from a neurophysiological perspective, and briefly discuss the resulting implications in regards to treating opioid overdose and addiction.

What Qualifies as an Opioid?

Opioids are opium-related drugs that bind to at least one opiate receptor in the brain, whereas opiates are technically drugs derived from opium. Opium is a drug that is obtained through harvesting organic resin from the unripe pods of Papaver somniferum, known as opium poppies. The harvesting of this material for the medicinal and enjoyable effects produced through the opiate receptors date back more than five thousand years. Opioids’ medicinal effects are mostly related to pain relief, but they are also known for the high degree of addiction, hence the double-edged sword. Opium is most commonly grown in South America, the Middle East, and Asia. At the beginning of the 19th century, Friedrich Wilhelm Serturner isolated the substance morphine and discovered that it produced the same effects as opium, only to a magnified degree. With the rise of the pharmaceutical industry in the second half of the 19th century, diacetylmorphine, better known as heroin, was discovered and synthesized from natural plant material by Bayer. This was within a year of aspirin being synthesized from plant material as well, which Bayer is synonymous with. Heroin is twice as potent as morphine in humans from a physiological standpoint. This is related to the chemical nature of the acetyl group. The acetyl group’s polarity is less than hydroxyl group’s polarity. This then allows diacetylmorphine hydrochloride to cross the blood brain barrier in a more efficient manner than morphine. This increased efficiency also makes heroin a more addictive drug. Due to the discovery of high rates of addiction, opioids were banned except for medical use in pain control and regulated in America.

The History of Opioids

The first completely synthetic opioid that was created was methadone during WWII. Methadone is commonly known as an opiate replacement drug, mostly for heroin addicts, because it limits withdrawal and is thought to be less enjoyable from a recreational standpoint. Opioids, though initially referring to synthetic opiates specifically, have become an umbrella term that encapsulates natural, semi-synthetic as well as synthetic opiates. Drugs like hydrocodone and oxycodone were introduced relatively recently in the 1980’s and 1990’s. Opioids are prescribed for both medical applications, usually involving managing pain, as well as illicitly abused within the global drug trade. There is sometimes overlap in this area, as we have an epidemic in both opiate abuse as well as prescription pills being the leading cause of drug overdoses, with opioids the most commonly involved drug. There are notable correlations between over prescription of opiates within the medical field partly accounting for the current heroin epidemic in the United States as people addicted to prescription drugs turn to heroin–a sometimes cheaper or more available alternative.

How Do Opioids Affect the Brain?

The known opiate receptors within the brain are mu, delta, and kappa receptors. Through this, it was discovered that humans have endogenous receptors within the brain known as endorphins. The word “endorphins” was derived by combining the words “morphine” and “endogenous”. Most commonly encountered opioids that work analgesically (to relieve pain) impact the mu receptor most. On the other hand, opioids more associated with the kappa receptor (which tend to be less commonplace) are less addictive.

While opiates are remarkably effective at pain control and can cause pleasant dreamy effects, they have numerous adverse side effects. Thus, “Darke et al. suggest that while heroin and methadone are not themselves neurotoxic, opiate misusers are potentially at risk of brain damage as a result of exposure to: accidental or deliberate drug overdose, alcohol abuse, and traumatic head injury.” Opiates are also known to cause memory impairment, constipation, itchiness, and urinary retention. Finally, opiates can also lead to sedation, cognitive impairment, confusion and respiratory depression at high doses.

Those regularly ingesting opioids develop tolerances quickly, meaning that more of the same substance will be needed to achieve the same effect. B. J. Collett, has stated that there are three different ways this can happen physiologically. Pharmacokinetic (dispositional) tolerance relates to the way that the way that the drug is metabolized changes. This then translates to lower concentrations in the blood as well as at the sites of drug action. This reduces the effect felt by the individual. This is related to continued use of opioids being responsible for adenylate cyclase enzyme adapting thus resulting in reduced reactions of firing cells. Another way tolerance can be developed is known as pharmacodynamic tolerance. This type of tolerance is a result of changes of systems related to opioids like their receptor density. Lastly, users begin to learn to function in a state of intoxication. Tolerance is problematic in that the user has the potential to take more and more of a drug that causes potentially lethal respiratory depression, as well as compromise values to attain more opioids. Often, with addiction, individuals will spend more and more time under the influence, and will be more likely to be physically dependent in order to avoid withdrawal. This is a shift that occurs in that positive reinforcement from the positive feelings of taking opioids is overtaken by negative reinforcement. The person using the opioids needs them to avoid feeling the unpleasant effects that now occur with removal of the drug. A common cause of death among opioid addicts is overdosing after a period of abstinence has lowered their tolerance.

Opioid addiction is largely characterized by tolerance, dependence, withdrawal, and often relapse. Opioid addiction in simplistic terms is largely centered on dopamine artificially engaging the reward system pathway. Without this same level of dopamine providing a reward that is a pleasurable euphoric high, when there are no longer drugs present, an individual may experience dysphoria or a strong sense of aversion. Dopamine from the ventral tegmental area is responsible for this and it affects areas of the brain such as the striatum, amygdala, hippocampus, and prefrontal cortex, all of which are associated with the reward system. One common barrier to abstinence is fear of withdrawal. With prolonged use of the substance, users experience what is known as withdrawal after a short time. Withdrawal is a result of nerve receptors being acclimated to function based on the added input from opioids. Without this added input, users begin to experience physical changes such as the inability to sleep, sweating, restlessness, diarrhea, goose bumps, rapid heartbeat, and high blood pressure. Addiction is essentially a learned behavior. According to Dacher & Nungent, “Fortunately, after the discovery of synaptic plasticity as a cellular correlate of learning and memory, it has been recognized that the process of addiction involves synaptic plasticity and consequent pathological over-learning of drug values by the brain… Therefore, it appears that the brain may, in fact, be learning to crave drugs”.

This post would be remiss if it did not mention that there are various pharmaceutical and non-pharmaceutical options to treat opiate dependence and/or addiction. Replacement or maintenance medications include agonists such as methadone, mentioned above, and Buprenorphine (Subutex, Suboxone) which is a partial agonist and fills the opiate receptor and blocks the high feeling. These “work through the same receptors as the addictive drug but are safer and less likely to produce the harmful behaviors that characterize addiction, because the rate at which they enter and leave the brain is slower”. Some might argue that the withdrawal from these types of medications can be more difficult than the effects of the drugs themselves or that the addiction is just being maintained and not ended. There are also opioid antagonists like Naltrexone (Vivitrol) which are not opiates and block the effects of opiates. Also notable is Naloxone (Narcan), an antagonist which is used to reverse overdose and save a person’s life. There are proponents that one should just become fully abstinent of all addictive substances. Often people struggling with opioid addictions are recommended to attend a facility that can medically detox them off drugs, and then once the person is off drugs teach them behavioral techniques to help them avoid using drugs again. However, the relapse rate is high because the opiate receptors have been altered and the addicted person is psychologically conditioned to use opioids.

In conclusion, opioids tend to be the best available medicine for pain management. On the other hand, opioids are also the quintessential addictive substance. This class of drugs tends to be associated with a large degree of stigma and has the potential to lead to addiction which can involve issues with friends, family members, the law, or health (sometimes fatal). Even more lethal than opioids are the synergistic effects involving respiratory effects involving alcohol, and even more so, benzodiazepines. Addiction to opioids is not a case of the often cited lack of will power and choice of poor morals, it involves a brain that has adapted to the input of neurotransmitters that make cessation very difficult no matter the individual. However, though relapse is very common (with tragic deaths not uncommon), overcoming addiction to opioids is possible with determination and hard work.

Every addiction starts with pain and ends with pain. 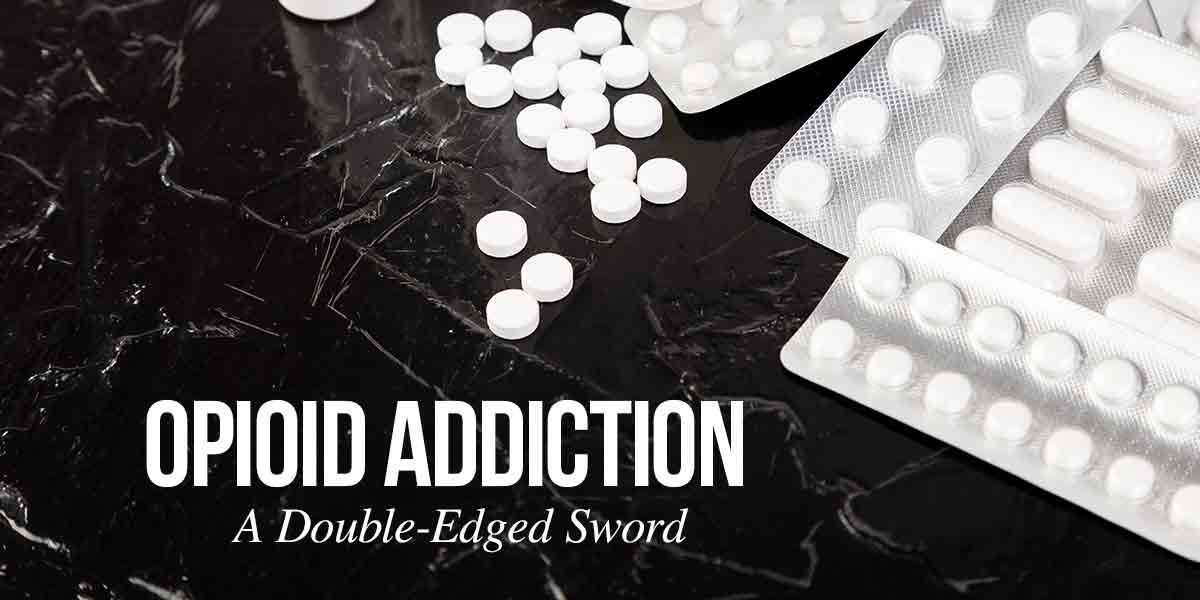 Article Name
Opioid Addiction: A Double-Edged Sword
Description
How is an opioid different than an opiate? How does someone become addicted to opioids? Learn the history of these potentially dangerous drugs and how addiction affects the brain.
Author
Jam F.
Publisher Name
Ventura Recovery Center
Publisher Logo